They say LED's are the new ECO-friendly lights. And it's true; they only use a tiny part of the energy the old Phillips light-bulbs used, for the same light output. So why not engulf your home with LED's?

One reason would be that LED's are still very expensive relative to the old light-bulbs. Even when you take their longer lifetime into account. The weird thing is, LED's aren't that expensive at all. They become expensive ones they're integrated in a design replacement bulb or fancy armatures (LED's can't be connected to your home outlet without some extra components to regulate current en voltage).

So when you buy only the LED's to build your own armature, then there's no limitation to how to light your home with lots and lots of LED-lights. So... where to start? My though was: the staircase. Because you go frantic with moving lights up and down the stairs, triggered by sensors on the steps. Could be fun to build and to program different 'movies' for my own stairway.

First step: buy some really cheap LED-strips. Preferably the RGB-leds. RGB-leds are just regular LEDs, only they managed to put three of them in one tiny chip, in three different colours (reg, green, blue). I found out that you can buy virtualy every kind of LED on eBay, so I ordered 10 meters of 5050-led-strips with 30 rgb-leds per meter, and paid only about 30 euros for it.

Every strip has one +12v and three ground connections (called common anode). Using pulse width modulation (PWM) to control the intensity of every LED-colour-channel, I can create thousands of different colours.

So there we are: step two. We need a lot of PWM controllers. With 12 steps, 3 colours per step, we need 36 PWM channels. My Arduino Uno only has 6 of them, so that's not an option. Texas Intruments has a solution: TLC5940, a 16 channel PWM unit with 12 bit duty cycle control. It has a serial input, and can be daisy chained to create even more channels. In this case, I need 3. Luckaly there is a library for this chip in the  Arduino Playground (I'd be suprised if there wasn't).

Next step: make a decent circuit board: 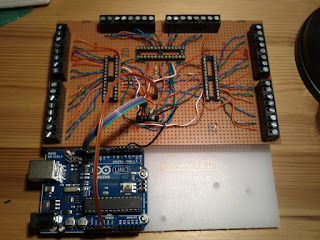 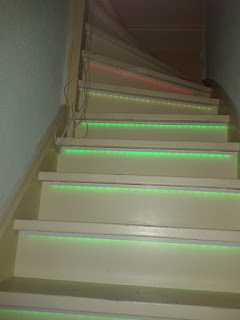 And fire it up!

Part 2 will be connecting the sensors to trigger the effects...